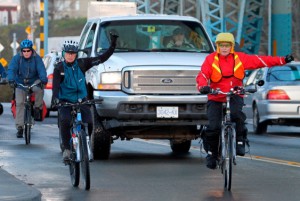 Cyclists signal while crossing the Johnson Street Bridge. Hand signals are useful for all users of the road, including drivers and pedestrians, by increasing fellow road users’ knowledge of your intentions. Photograph by: ADRIAN LAM, Times Colonist

Hand signals are a very effective way to communicate with other drivers, riders and pedestrians.

Before every driving road test, the candidate for a licence must demonstrate their use.

What are the 3 hand signals?

Left Turn: An outstretched left arm designates an intention to move left.
Right Turn: When the arm is extended at a right angle, upwards out the driver’s window, it means the vehicle will move right.
Slowing down or stopping: The same right-angle downward arm motion tells us the driver intends to slow or stop.

Anyone who has ridden a bicycle knows the necessity of using hand signals to warn others of a change in direction.

When cyclists use hand signals, it is acceptable in some cities, provinces and states to use the right arm extended fully to indicate a right turn. This actually makes good sense when you think about it. The only reason car drivers use the left arm is because of clear inline visibility from car to car. When cyclists use either the right or left arm extended, there is no doubt about their intention. They are in effect pointing in the direction they wish to go.

I like it when motorcycle riders use hand signals. Electric signals on most bikes do not cancel automatically. They are often flashing long after a turn or lane change is completed, giving the wrong information to vehicular and pedestrian traffic alike. Motorcycle signals are small and difficult to see in the bright sunlight. Good riders always use a hand signal for additional safety.

Pedestrians should use hand signals too. There is no law that makes it mandatory, but it is a good idea nonetheless. By extending an arm in the direction they wish to walk, pedestrians take the guesswork out of every scenario available to them. Drivers pay more attention to people who appear to be waving a hand in their direction of intended travel. This personalizes the action about to be taken. Extending an arm and getting eye contact with an approaching driver is a very effective way to communicate from the sidewalk. Each year across Canada, about 400 pedestrians are killed when hit by vehicles.

Last week, I was preparing to stop for a pedestrian who wished to cross the road at a legally designated and well-marked crosswalk in broad daylight. The crosswalk was painted in an intermittent fashion, commonly referred to as a “zebra” crossing, where stopping is not mandatory unless the crosswalk is occupied. Overhead signs clearly indicated the presence of a crosswalk. Advance crosswalk signs were also present. Despite all these warnings, and the fact that I was slowing to accommodate a pedestrian who wished to cross the street, the driver behind me pulled to the left lane in an effort to pass at the intersection. As luck would have it, my window was down, and I managed to get my arm out the window and wave frantically at the passing driver on my left. The pedestrian had already begun to cross the road and would have been hit by the passing driver had it not been for my hand signal. He skidded to a stop. A tragedy was avoided. Used effectively, hand signals save lives.

Pedestrians who want to cross the road at a crosswalk can help themselves and drivers by giving a hand signal. An extended pedestrian’s arm in the direction of intended travel is welcomed by drivers. When this action is combined with eye contact, it makes a world of difference to pedestrian-driver communication.

Many drivers use a wave of the hand to direct activity at an intersection or in a parking lot. They are usually giving the right-of way to another. The right-of-way should only be given, not taken.

Drivers parked at the side of the road will often gesture to those following to pass by waving them on.

Hand gestures directed toward another driver to insult, threaten or intimidate are best ignored. Responding to such actions is juvenile and unproductive.

The Importance of Hand Signals

Hand signals personalize the actions of the driver. The arm out the driver’s window means the driver really intends to turn. Vehicle signals are often left on by mistake and do not have the same effect as a hand signal. Any time we are reminded of the person behind the wheel of a vehicle, rather than an inanimate object going down the road, it’s a good thing.

Hand signals should be done before but not during the turn. Two-handed turns are still mandatory on any driving test and are a much safer way to negotiate a turn than a palming action, all too common amongst today’s drivers.

I have seen many an excellent driver avoid the pending disastrous actions of other drivers by using the arm extension. Professional drivers will often warn others going the same direction in the left lane of a person occupying a pedestrian crosswalk. Pedestrians leaving the curb are sometimes hidden from the view of a driver in that left lane. Seeing an outstretched arm is indeed out of the ordinary. It alerts drivers behind of a potential danger in the immediate foreground area.

Using a hand signal along with eye contact with another driver or pedestrian is very effective. A cab-driver friend of mine would not only use a hand signal when leaving the curb, but vault his torso out the driver window as he made eye contact with the approaching traffic, with the intention of getting them to allow him into the immediate travelled lane. There is no need to be so demonstrative. I have got the same polite accommodation from other drivers with simple eye contact.

Most professional drivers will use hand signals to get better recognition from the other drivers around them. I know of one taxi driver who, when leaving the curb, opens his driver window and extends half his upper body out the driver’s side with a hand extended in a similar fashion as policeman stopping traffic. It works and allows him to get back into the adjacent lane. He says it is effective because it personalizes the driving task. It surprises some drivers and cyclists and makes them aware of the taxi driver’s predicament. It also lets people know, in a very emphatic manner, that a parking spot is about to become available. The left arm is used for a proper hand signal. Straight out is a left-turn warning, out and up is a right turn and down is a signal warning that a driver intends to slow down or stop.

The History of Hand Signals

The first internal combustion machines did not come equipped with headlights, let alone automatic turn signals. A raised arm was the only method used to indicate a driver’s path of travel. Turn signals were not used extensively until sometime between the First and Second World Wars, depending on the geographical jurisdiction. In fact, an anecdotal account of the first car crash between the only two vehicles in the state of Ohio was proof that some signalling action was necessary.

Some vehicles, such as early VWs, had a mechanical turn indicator that flipped out on the appropriate side of the car prior to the intended turn.

Hand signals are useful for all users of the road, including drivers and pedestrians, by increasing fellow users’ knowledge of your intentions.

A smile and effective use of hand signals will get positive results. Try it — you’ll like it.