It’s time for B.C. to lose the N stickers 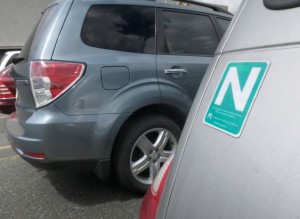 While the ‘N’ phase of driver education is useful, the way the legislation is set up is poorly thought out, columnist Steve Wallace argues. Photograph by: Times Colonist

Student drivers must display an “L” while driving with a co-pilot for at least a year after passing a theory test. The “L” is replaced by an “N” when the learner passes the first road test.

New drivers in B.C. must then display an “N” while operating a motor vehicle until they successfully qualify on a second road test, which may be attempted within 18 to 24 months, depending on the type of driver-education course successfully completed.

The obligation to use the “N” is fraught with inconsistencies, misunderstandings and general non-compliance throughout B.C. and beyond.

Driving schools are exempt from displaying both the “L” and “N” when teaching student drivers. The “STUDENT DRIVER” sign must instead be clearly visible at the back of the school vehicle.

Curiously, student drivers in driving-school vehicles must display the appropriate “L” or “N” when driving with the examiner, while doing the driving test. This is a redundancy that has never been properly explained by the licensing authority. I have heard every lame excuse for this policy, none of which make any sense. ICBC as the testing facility should move quickly to eliminate the need for examiners to put the “L” or “N” on the back of an already well-marked driver-education vehicle.

The “N” phase in B.C. is a never-ending odyssey. A driver who chooses not to take the second road test can retain the “N” forever. This makes absolutely no sense. In other jurisdictions, the same phase lasts for a maximum of five years. No other jurisdiction that I know of, and I have searched, has such a ridiculous system.

Many new drivers who are well into their 20s simply do not use their “N.” It brings unwanted attention, sometimes bordering on harassment. The likelihood of a mom or dad transporting children being thought of as an “N” driver is slim.

The fine for being caught without displaying the “N” is $109 and no penalty points. The test to get rid of the “N” costs $50. Employment opportunities, intercontinental travel, social pressure and a host of other reasons motivate some people to take the test and shed the “N.” But for the most part, there is no compelling reason for others to do so.

There is a very good reason for young women to get rid of the “N.” Criminally inclined people are able to identify a young woman driving alone at night by simply looking for an “N” at the back of the car. I have talked to many teen girls who have felt threatened in this way. Some parents who are well aware of this threat actually forbid their daughters and sons from using the “N” in such situations and agree to pay the fine.

Whether we agree with this behaviour or not, it is a fact of life.

I wholeheartedly agree with the “N” phase. The alcohol restriction, the lower traffic-ticket tolerance, restrictions on passengers and other limitations make sense. I do not agree with the mandatory display of the “N.” It is too easily removed without the knowledge of the driver. Permanently affixing it is impractical at best and a misrepresentation at worst.

To whom it may concern: Keep a five-year phase, kill the display and fix the other minor problems.