The real lowdown on traffic signage 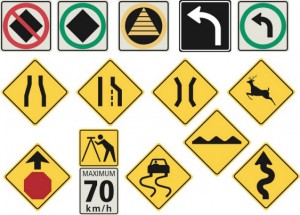 Do you know the meaning of all of these common traffic signs? Columnist Steve Wallace suggests many drivers think they do, but could use a refresher course. Photograph by: Times Colonist

Do you know your signs?

I am not talking about your sign of the zodiac, but of everyday roads signs.

Here is a sampling of some traffic road signs of which every driver should be aware.

The black diamond within a green circle means dangerous hazardous goods are permitted to be transported on that particular route and roadway.The same diamond surrounded by a red circle and bar across it means just the opposite.

It is important to be able to not only identify this sign combination but also be conscious of the proper escape route, should it be necessary to take travel alternatives to avoid a spill of toxic material or a gas leak associated with a big rig crash in a sensitive populated location.

Sadly, these two signs do not appear in the Learn to Drive Smart handbook distributed free of charge by licensing authorities in B.C.

The black background and white left turn arrow sign is often confused with the black arrow within a green circle. The former shows the left-turn use of a lane only, and is displayed overhead above the appropriate lane prior to an intersection. The latter is placed at an intersection and means all traffic at that intersection must turn left.

The diamond sign with a deer displayed within seems obvious enough, but its placement is much more detailed and scientific than most drivers appreciate.

Several trucking firms have helped the B.C. government identify those areas where deer are most apt to cross the highways and roads in certain areas of the province. Truckers in the Interior were able to transmit the exact location of deer crossings and fatally hit deer crashes, by sending a message to the proper authority in the central interior region of B.C. It allowed for an exact mapping of the most likely conflict with deer, moose, elk and caribou.

I am not sure if the study was extended to other parts of the province, but suffice it to say, when you see a deer warning sign, that is where they are bound to cross the roadway. There is a lot more logic used in deciding where these signs are placed than is generally appreciated by the driving public.

Whenever I quiz drivers about the meaning of rather obvious yellow warning road signs, I get back some ridiculous but entertaining answers to my questions.

I have been told that the advance warning of a stop sign means “apple orchard ahead.”

The survey crew sign means a movie is being shot in the immediate area.

The notice of a bumpy road has been interpreted as meaning the driver is in a mountainous area.

A slippery-when-wet sign has been mistaken for a no drag racing site.

A winding road ahead warning sign means snakes may be on the road and it could get slippery.

These rather alarming answers to the meaning of simple roadside warning signs give me the impression that every driver should become more acquainted with the driving-theory material provided free of charge by licensing authorities.