Amber Traffic Lights: To Go or Not to Go? 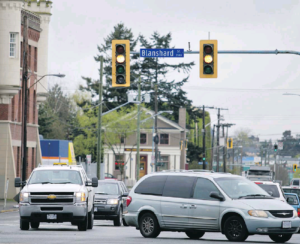 Drivers are required to stop when the traffic light at an intersection changes from solid green to solid amber, but there are exceptions to this very simple rule.

If a driver is already in the intersection or so close as to be unable to stop safely when the solid amber light appears, it is proper to proceed through the intersection.

The law is very clear, but the application is anything but clear to many drivers.

As is so often the case, some drivers believe they must speed up to get through the intersection.

This is a foolish decision.

For this reason, the police are much more likely to ticket drivers who increase speed when approaching an intersection to make it through the light cycle.

It’s a good idea to be ahead of the change cycle by watching the declining pedestrian countdown numbers governing the use of the crosswalk.

One can often predict the cycle change by paying attention to the number of red hand flashes alerting pedestrians of an imminent change of cycle from solid green to solid amber.

The best way to safely approach an intersection with a stale solid-green traffic light (one that has been green for long time) is to do a mental countdown while covering the brake pedal.

Most professionally trained drivers will internalize the thought process of approaching intersections.
They are actively thinking about stopping by covering the brake.

Only when past the point of no return will they move their foot from covering the brake back to the accelerator.

Many rear-end collisions happen when drivers are caught by surprise by a traffic-light change. They slam on the brakes, when they could have easily made it through the intersection safely.

To avoid hitting such an inattentive or panic-stricken driver, always allow a little more space between vehicles when approaching traffic lights at intersections.

A driver can enter an intersection safely and remain there when setting up for a left turn facing oncoming traffic.

Once it’s safe to do so, a driver is duty-bound to vacate the intersection.

Drivers should not hang back, only to dart through the intersection while making the left turn on the solid amber traffic light. This is a recipe for disaster.

Occupying the intersection makes a driver more visible to others, both pedestrians and drivers.

What does flashing amber light mean?

A flashing amber traffic light at an intersection means proceed with caution, particularly when cross-traffic has a flashing red light, which means drivers must come to a complete stop.

What should you do when you see a flashing amber light?

Flashing amber lights can also be at dangerous curves or where visibility is limited by a hill rise or other visual obstruction.

They also mean proceed with caution.

Bright amber lights alternately flashing at a pedestrian crosswalk mean drivers must come to a complete stop for people wishing to cross the road.

Once the pedestrians have safely crossed, it is legal for vehicular traffic to resume, despite the fact the lights continue to flash.

Drivers are well advised to delay their resumption of travel long enough to make sure there are no pedestrian stragglers.